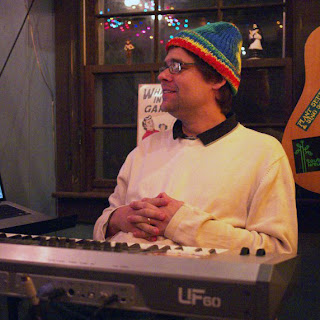 “I am out to sing songs that will prove to you that this is your world and that if it has hit you pretty hard and knocked you for a dozen loops, no matter what color, what size you are, how you are built, I am out to sing the songs that make you take pride in yourself and in your work. And the songs that I sing are made up for the most part by all sorts of folks just about like you.” - Woody Guthrie

Astute listeners will recognize this, the second track to my upcoming album, Brass Beats, as a remix of Follow Me Home (Beautiful Day Mix). Which is in itself a remix of sorts, in that I nabbed the vocals for the hook off ccmixter.

I've chopped up the beats and refunktified 'em into the angular, IDM'ish jazz style I'm going for on the album. Of course I've added some laid back "soft serve" style trumpet, and I threw in some bass guitar to thicken it up too. Think it turned out pretty good.

I'd planned to have at least one more track ready for Brass Beats by now, but the funniest thing happened. As soon as I declared that I'd found my genre with this stuff, and that this was my sound, the best rock n' roll song I've ever written fell into my lap out of the ether like a 500 pound Italian-immigrant gorilla, out a' work 'cause the union's on strike down at the zoo.

On the one hand, I'm a smooth jazz guy with electronica/hip-hop flavoring, and on the other hand, I've got an itch for writing blue-collar pop/roots/rock stuff.

So today, at precisely 10:28AM, while rinsing shampoo out  of my hair and praying that the hot water wouldn't run out, the most preposterous, over-the-top idea for a double-album that nobody will ever hear or care about was hatched.

This is the gist of it:
Plurgid presents, a Phatazz Orchestra production:
Class Warfare: The Soundtrack


The idea being that "side 1" is a collection of suburban white-collar workin' man's anthems with a side of roots rock and blues, and "side 2" is the smooth-jazz Buddha lounge version of the songs from side 1.

You play side 1 at the tailgate, and side 2 in the cocktail lounge.

It's genius. It will never happen. But if it does it will be completely unknown in my lifetime.  However countless hipsters of the 22'nd century will cherish their vintage mp3 copies not only for the home-made aesthetic, but also for the superb songwriting, and genius beat-making.
Posted by Plurgid at 9:23 PM