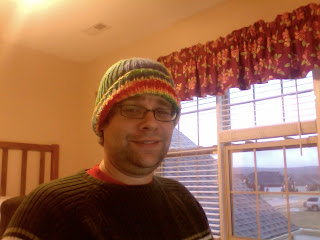 I bought this hat from a gen-u-ine-bona-fide hippy last weekend at the Flying Monkey Art Market. Its probably been knitted from sustainably harvested soy cotton, watered by the tears of mother Earth. Or something.

I mean, it looks cool. At least I think it looks cool. Over the course of the week, I have observed it to impart what I can only describe as "Groovy Hippy Powers". From risky football picks, to insane musical inspiration, it's clearly all been the result of the hat this week. For instance: the wobble bass on this track. 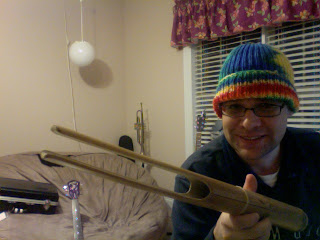 It started out as this sample I made of a bamboo toy, which I also bought at the very same art market. The dude called it a "blingaling", and claimed it to be from an unnamed asian culture. Google's never heard of it. So I find that a bit suspect. That's it on the right. Basically you hold the base with one hand and slap the prongs across the outstretched palm of your other hand yielding the sound of Beavis getting excited.

I put that into Logic's ESX sampler and I slowed it waaaaaaay down. So it sounded like this. Stretched out in this way, you can clearly hear the individual transients created by the prongs slapping together. I added a little reverb to smear them out slightly, and I bounced it out to a file. Once the file was loaded up as audio, the waveform also clearly illustrated the prong slapping pattern.

So what I did then, was I zoomed way in and sliced it between the zero crossings on the waveform, and looped it. The faster you loop it (i.e. the shorter the sample) the higher the frequency. Not exactly a new idea in sampling. I used to do this on my old Radio Shack SK-1 knock off in the 80's (about Andrea's age actually). You could sample a finger snap, loop it real tight and get similar results. Anyhow, I sliced up a pretty long one and looped it. It sounded pretty much like an idling diesel engine. Check it out.

The next step was to load that loop up in esx and loop it. ESX's loop button wasn't at all obvious, so I offer this illustration as a public service. This column is hidden by default. You must open the "View" menu and select loop first. In any case, once you've got that, you've got your big, nasty farty pulse wave thing, but the pitches are gonna be way off. What I did was I inserted a tuner plugin on the channel strip and picked a random note that wasn't too far off the correct pitch, then I used the ∫course and fine columns to tune it until it was on pitch. 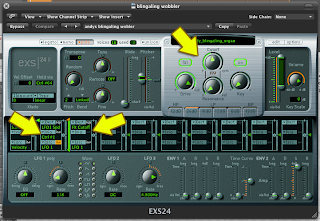 At this point the sound has a very energetic, sort of hissy high end. A vaguely 80's Atari or Nintendo NES type of sound. Like the world's nastiest humming bird.

It does not, however, wobble. The kids these days, they like "the wobble". Thankfully, "doing the wobble" isn't just a fabled dance craze from 50's, it's also super easy to set up in ESX.

The first thing to do of course, is to turn on the filter, and select a filter mode to your taste. For proper wobbling you're really gonna need the big 24 db low-pass. You'll want to pull up the drive and the resonance and play around with sweeping the filter around until doing so sounds cruddy and "wompy" enough for you.

Wobble can be achieved by running the cutoff sweeps from the LFO, tempo syncing the LFO, and sweepimg the tempo sync interval (1,1/4,1/8t, etc, etc) manually. Myself, I like to use the modulation (vibrato) wheel to do my sweeps.

So,  starting at the first arrow, set the LFO1 Speed from "Ctrl #1" (the mod wheel). Go to the next boxover and set the filter cutoff from LFO1. BAM! done and done! I embiggened it further by adding sub-bass, overdrive and compression. Slapped some drums and got to slicing and dicing and out came the track you hear.

All thanks to the hippy hat, really. It's clearly infused with funky vibes. Here's Another track using this instrument.
Posted by Plurgid at 4:43 PM