Love is so easy 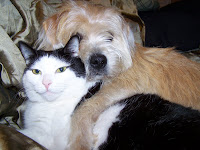 I've got a ton of new stuff I'm working on, from an industrial/glitchy/metal remix, to a doo-wop thing that just came out of nowhere (yeah really), and of course the ever-present Metropolis re-score project which is coming along nicely as well.

I've got a lot of neat stuff in the works, but nothing new to post, so this week, it's a re-run, "diggin' in the crates" if you want to sound cheesily hip about it. This is a beat I put together way back in 2008. I was listening to a lot of Common and Kanye at the time, but I was more into the "chi-town soul beats" thing than the emerging ... whatever the hell it is that Kanye & copmany are doing these days ... art-pop-electro-fusion thing. I think this was more or less my take on that influence.

Also yes ... that picture is real, that really happened, LOL.
Posted by Plurgid at 10:14 AM No comments:

You, In the Machine 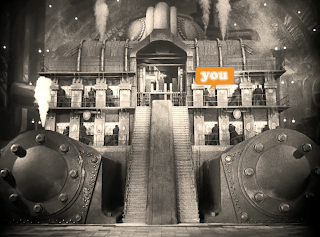 "If you can't build a robot, be a robot" -Abe Simpson

I really love working on Metropolis. There's a surreal aspect to crawling inside the universe of a film older than my grandmother, and seeing our own world through the lens of it's view of the future. Seeing how accurate it was in some respects, is what takes it right into the spooky.

This is a quick bounce of an early version of my score for this famous scene ("the machine").  Got to finish some writing on this, then sync it up to the video. See also: Clockwork Daydream (Intro & Opening Scene)
Posted by Plurgid at 10:10 PM No comments: 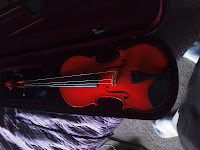 Disney World was a blast. Even though most of it was princess-themed stuff targeted at my daughters, I've gotta say I had a pretty good time.

As expected, we are now broke as a joke, so it's really amazing that  I managed to pick up a new instrument yesterday. I found that violin on the left, at a yard sale advertised on craigslist for $20! I couldn't believe it. It's a cheapie for sure, and it's missing a tuning peg and has a broke string, but for that price if it even makes noise, its a steal. So I ordered a new tuning peg (which I understand I'll have to sand down or something to fit it) and a new set of strings. I'm in about $45 on it now. Probably will need a new bow as well, but it does play.

I just LOVE the sound of it, and I don't even know how to play it. That's probably one of the reasons I like it so much. It's the exact polar opposite of playing sterile, professionally recorded string samples. It's wild, uncontrolled, raw, screechy, woody goodness that is just gorgeous through a  reverb.

Also it is hard as hell to play. I have a whole new level of respect for string players. For one thing there are no frets. It's going to take some serious learning to know where the various pitches are.

Even not knowing how to play it at all, and basically using the tuner to stake out where the two notes I was interested in were, there's an infinite number of articulations via the bow. Just super fun stuff.

The beats (and the synthy delay thing) were programmed by routing Wouter Hisschemöller's badass (and free) euclidian sequencer into Logic via the IAC Driver (which is really one of the coolest things to play with). Of course I put some slicing and dicing in with my new toy, Stutter Edit ... but I've got to say, I'm starting to get a little bored with it. It can do some cool things, but it's like hot sauce ... even a little bit can be too much. That's of course, not the case here :-)
Posted by Plurgid at 10:15 AM No comments: