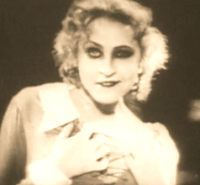 This seedy-looking woman is not who she appears to be. She is, in fact an identity thieving robot sent by wealthy industrialists to infiltrate a gang of union thugs by impersonating their leader.

This is Maria from the silent film, Metropolis.

I have taken on what is by all accounts an insane, and daunting project. The Mars Underground (my electronic side project with Bryan) is going to re-score this most iconic, inexplicably beautiful (and the more I watch it, the more I realize -- also prophetic in many ways) science fiction film from 1927.

This is our score for the title sequence and opening scene:

Yes, this has been done before. No, I'm not trying to jock Georgio Morodor's style. I just really, really like this movie. It's creepy in that old timey way, and basically this film visually articulates my relationship to computers perfectly.

This is going to be awesome. Music for the next scene is already half written. It's like the project has a will of it's own.
Posted by Plurgid at 10:26 PM