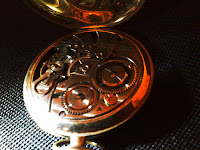 This is a track that I cooked up last night with Bryan Bacon. We've been talking for some time about getting an electronic side project together under the name The Mars Underground. I don't know if that will necessarily grow out of this, but it's a pretty damn cool track, all the same.

I was going to make a joke and call this "chillstep" because it's basically chillout electronica, but I added the dubstep bass, because I just bought NI Razor, and I wanted to play with it. Razor can do a whole lot more than wobble basses, but it does make building really great ones stupidly easy. Anyhow, out of curiosity, I googled the term "chillstep", and sure enough ... there actually is a such thing. Proving again, that if synths and a drum machines are involved then someone, somewhere has described it by taking any adjective or noun from the dictionary at random and slapping "-step" on the end.
Posted by Plurgid at 7:59 PM